Eighth generation family member to have worked at Berry Bros. & Rudd in his previous role as a wine buyer for the company, David now runs his own venture, DBGitalia. David grew up interested in wine – in particular the culture surrounding it – and worked in France learning about winemaking for two years after leaving school. However he left the vineyards to study business in the early 1990s. Discovering that he missed the wine world, David joined Berry Bros. & Rudd on the shop floor as a Shop Assistant in the Heathrow store, and has never looked back.

During his early years at Berry Bros. & Rudd, David worked for the spirits side of the company, as a regional manager for Cutty Sark, and with the website team before becoming a Wine Buyer in 2001. This appointment enabled him to pursue his passion for wine. During his career he has bought wines for the company from Burgundy, Spain, Australia, South Africa, New Zealand, California and Hungary, and he continues to source from the Loire, Alsace, Austria and Germany. In particular though, David had always been intrigued by Italian wines and their unfulfilled potential, but had never visited the country until a trip to visit friends in the early 1990s. In his own words, he experienced a "Damascene moment" when opening a bottle of 1989 Barolo: "I remember thinking ‘this is fantastic, why don’t we do more with these wines?’ I realised that there was something special & classical in Italy, on a par with France’s finest." 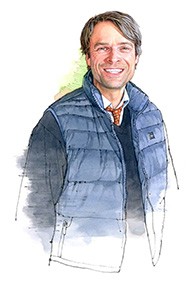 The Barolo was from the La Serra vineyard, made by producer Poderi Marcarini who David works with to this day. In his position buying for Berry Bros. & Rudd, David increasingly focused on Italy; he says: "I was aware that there was more amazing wine to be uncovered and brought to market." Citing the close relationship of Jasper Morris, who joined the company in 2003, with Burgundy, David realised that "I could only do this properly by living there."

Over the past 20 years, David says that he has witnessed a change in the Italian wine scene. "Wines with a high alcohol content, international punch and soaring price points that had been produced in the late '80s, '90s and early 2000s lost their allure, as producers up and down the peninsula turned again to indigenous grapes, valuing their terroir and traditions. This heralded a return to elegance."

In 2009, David journeyed to the Langhe, the region in Piedmont that is home to Barolo, the grape behind the majestic Barolo and Barbaresco wine styles. There, in the village of Serralunga, he met Davide Rosso, of producer Giovanni Rosso, and was inspired by his wines. David feels that this meeting was fate: "I always follow my nose, and I felt that it had led me to Serralunga to meet Davide." He moved to Serralunga shortly after this encounter, to better observe and understand the changes in Italian fine wine and in order to buy the finest and truest examples for Berry Bros. & Rudd’s customers.

David now lives in Barolo, where he is in constant contact with the local producers. His favourite part of the job is identifying, nurturing and bringing to the market truly fine authentic Italian wines, made by producers "who are doing the right thing". David sees himself as the bridge between the right producers and the right customers. He places a premium on understanding the context in which the wines are made, which allows him to help producers to grow through their relationship with Berry Bros. & Rudd. In essence David continues to seek out wines of great integrity and elegance, exceeding customers’ expectations, and delivering great value at whatever price point.

In his spare time, David is a keen ornithologist. He was always interested in birds, but found when he moved to Italy that his new home was a particularly spot good for enthusiasts. He says: "One of the great attractions of the Langhe is the annual visits by nightingales. We also see rare birds such as hobbies, a type of falcon."

Aside from the wines of the Langhe, his first love, David recommends red wine from the Taurasi region in Campania. He says: "It’s exciting because the Aglianico grape that they use is of a quality similar to the Nebbiolo of Piedmont. The potential of Taurasi is huge; Aglianico and the exciting volcanic terroir give it the potential to be the Barolo of the south."

David is also a fan of German wine from the Mosel region. He believes that the white wine produced there is one of the purest expressions of Riesling.