In his own words, Jasper Morris got into the wine trade because he didn't want to be a lawyer. In reality, he was stimulated by wine from a young age. Jasper worked in a London wine shop before establishing Morris and Verdin wine merchants in 1981. His partner was Tony Verdin, owner of the still thriving 'Cherwell Boathouse' restaurant, among other businesses. Jasper was able to travel round France selecting wines for the new company.

Jasper soon discovered that Burgundy, above all, held a fascination for him. He says: “The people really cared; they were much more than peasant farmers, but they weren't commercial businesspeople either.” Jasper became known as a specialist on the region, and established a base over there in the early 1990s. 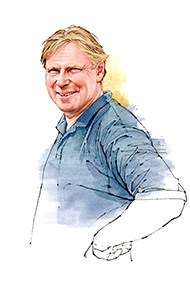 Inside Burgundy is now on its third print run and has subsequently been released on the Apple iBookstore as a series of enhanced ebooks, featuring maps and videos of Jasper himself in Burgundy.

If forced to choose, Jasper most loves the wines produced in the Burgundian commune of Volnay, in the Côte de Beaune.

However as Jasper says, "what is really wonderful is when you taste a wine, however lowly, and know that it has been made as well as it possibly can be".