A spotlight on Ch. Lafite Rothschild

The Rothschild family have been the custodians of Lafite for 150 years. Saskia de Rothschild is the face of the new generation at the Pauillac first growth.

Not so long ago, Saskia de Rothschild was a journalist based in West Africa. Today, the 33-year-old is chair of Ch. Lafite Rothschild, the iconic Bordeaux first growth that’s been in her family for 150 years.

There was a changing of the guard at Lafite in 2018: Saskia took over from her father, Baron Eric de Rothschild, as chair of the family group; Jean-Guillaume Prats – formerly of LVMH and Lafite’s neighbour Ch. Cos d’Estournel – succeeded Christophe Salin as its CEO; and Eric Kohler became the estate’s director, taking the reins from Charles Chevallier.

Saskia had no intention to head up Lafite in name only: “It’s very much a hands-on, on-the-ground job,” she explains over Zoom. Putting aside her MBA and master’s degree in journalism, Saskia returned to education to study viticulture and oenology. “I wanted to have that link to the product,” she says. Today, she’s heavily involved in the technical side of the operation.

“I grew up in these vineyards,” she says. “But once you work in them, you change your perspective. You have your intuitions that you end up following, or that you don’t follow. The one thing I’ve done for the past four years is listen. I listen to what people have to say, to understand what people are doing in our estates – and outside. I think it’s super important, even more so in Bordeaux, to have your ears open.” 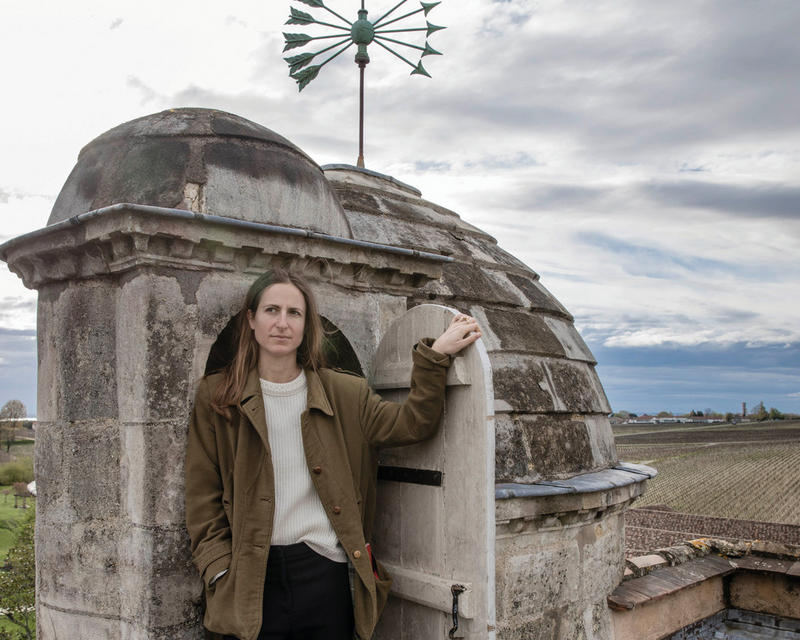 View from the top: Saskia de Rothschild, pictured here on the château roof, has led Ch. Lafite Rothschild as chair of the family group since 2018

By virtue of growing up here, Saskia has long known many of the people she now manages. “I’ve always known them,” she says, “but I knew them from a child’s – and then a teenager’s – point of view. As a big family. When we were little, the people who worked in the vineyards would push our pram. Francis [Perez], the maître de chai, has been here since before I was born; I used to go into the cellar and pull his shirt, and run on the barrels. He’s seen me grow up.”

The Rothschild name may be on the label, but Lafite’s is not solely a Rothschild story. “What’s incredible is that you have these ‘Lafite families’,” Saskia explains, “who have been around for almost as long as my family. The Clemenceaus, for example: some of them work on the tractor, some work in the cellars and some work in the vines. They have always known Lafite, they’ve always known the place.”

New faces are important, too. Colombian native Manuela Brando has been leading research and development, particularly in biodynamics. Notably, Saskia has partnered with Action Emploi Réfugiés, a French NGO, to run a work programme for refugees, where participants receive training in both viticulture and the French language.

“They’re all very, very passionate and down to earth,” Saskia says of the Lafite team. “Everyone has this kind of ingrained humility in them, and a real curiosity to see what happens elsewhere. And I think that’s really something we have to nurture.” 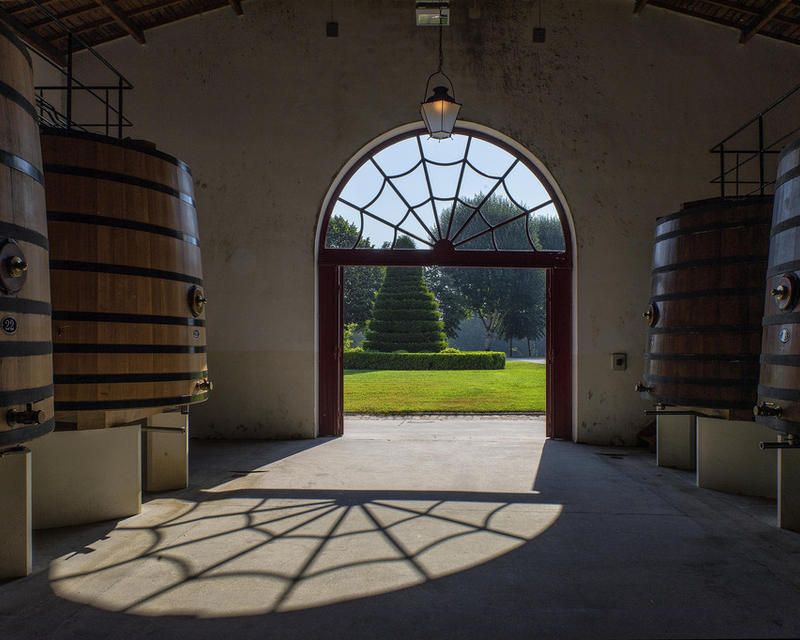 The northern end of Pauillac boasts some of the finest terroir in the wine world, let alone Bordeaux. Here, Lafite is separated from St Estèphe by marshland and the Jalle de Breuil stream. Fellow first growth Ch. Mouton Rothschild is a neighbour. But for collectors – and for Saskia – Lafite has an identity all its own. “Lafite is not someone who walks into the room and that you notice,” she says. “It’s someone who you take time to love.”

This elegant, understated style is something Saskia wants to preserve: “We want the identity of the wine to stay the same, to stay very connected to its terroir. We have this approach, this style of wine that never followed fashions. We never went in the direction of too much wood or of making very opulent wines. We didn’t do that because this isn’t a vineyard that allows us to do that. If you look at the Pauillac terroirs, ours is the wine that has the most delicate approach.

“This extraordinary terroir gives us the identity of the wine,” Saskia says. “We have this absolute balance, this perfect capacity to regulate extremes. I think that’s our main jewel; it’s the wisdom of the land and of the soil and of the vines. They have been there for years, and that allows us to regulate extremes. Seeing it at play in a certain vintage is absolutely magical. For example, in 2018 many neighbours had alcohol levels through the roof, but Lafite remained at 13.3%.”

Saskia identifies two zones of the vineyard as being particularly special: “We have this amazing gravelly plateau which is the heart of the grand vin. And the second really high-quality area is the Plateau de Carruades. With these two areas, we’re trying to see how we can build the ideal vineyard for tomorrow.”

When planning for tomorrow, it seems wise to think about yesterday, too. Much of Bordeaux’s most prized terroir is farmed as a monoculture, with grapes being the only game in town – but this appears to be changing. “The 1980s were really the years of industrialisation,” Saskia says, “when everyone replanted, planting as much as they could, planting every little area with vines. We’re coming back from that era, and it’s really great.

“When you look at maps of 1950s and 1960s, you can see that Lafite was a polyculture,” she continues. “We have 110 hectares of vines [today], but we have 300 hectares of woods and marshes; they are an integral part of the ecosystem. Now, more than ever, we’re looking at the vineyards and uprooting certain areas to create these couloirs végétaux – corridors of trees – that bring freshness. We’re kind of resetting the rules of what a vineyard should be, in the sense of it being not just a production tool, but an ecosystem that you can have a dialogue with. Good for growing vines, of course, but also good for biodiversity.” 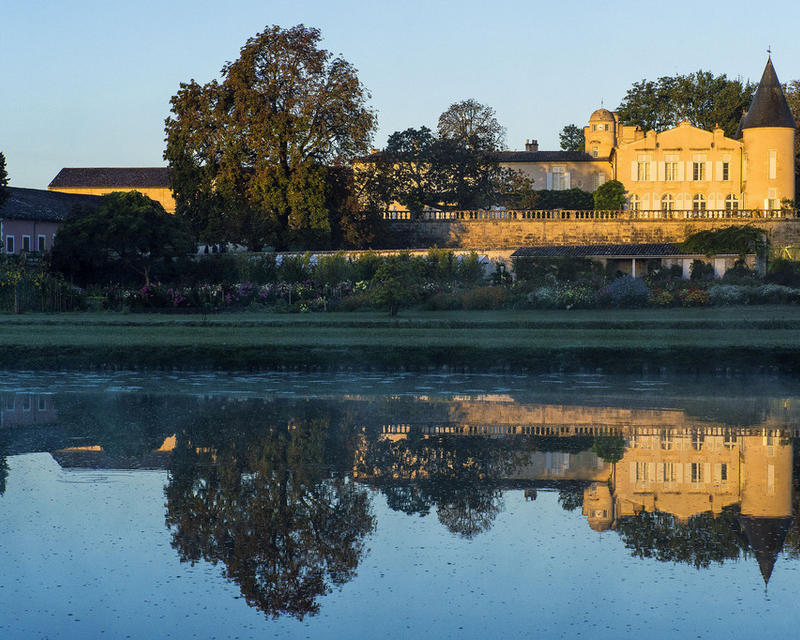 The château building at Ch. Lafite Rothschild is one of the Médoc's most memorable

A VINTAGE OF CONTRASTS

The 2020 vintage was one of contrasts, Saskia explains. “We had a very, very warm spring,” she says. “At one point, there were 55 days without rain. So it was very dry. At the same time, it was the vintage where we got the most rain in the shortest amount of time: it was very wet at certain key moments. It was a vintage of changing our minds every five minutes, walking the vines and looking at the climate apps in a very obsessive manner to make decisions, because it changed from one day to another. We had a wonderful surprise, because we had that quite warm summer and we expected the alcohol to be through the roof. In the end, it wasn’t.

“It was also a vintage of teamwork,” she adds. The pandemic meant that some vineyard workers were medically at risk, unable to come to work, with others looking after children at home. “A lot of the teams who aren’t usually in the vineyards were out there working. Everyone had to put their hand in it – the barrel makers, the cellar workers – everyone was in the vines in June to help.”

Stylistically, she draws a perhaps unexpected comparison: “We’re coming back to the balance of the 1990s. We’ve had a few vintages that were a little bit more opulent, and you would expect from the data that 2020 would go in that direction. But when you look at the style of the wine, and the balance, it reminds me more of a wine from the 1990s. So that’s a very good surprise.”

“The pandemic has struck a nerve that we were seeing already,” says Saskia. “Everything that is happening is asking us to be humbler and more patient. If we want to make a decision in the vineyard, we have to wait 10 years to know if it was the right decision – to uproot a plot or to change a varietal. We have this notion of temps long – slow time, slowness – and I think that’s needed more than ever.

“There is a global warming situation. We have to prepare for it and look at the future. We have plans for replanting until 2045. It might seem quite weird, for any business, to be looking as far as 25 years from now. But we need to.”

Such long-term thinking is vital for Saskia. “We want people to drink our wines. We have to touch a new generation of wine lovers, who maybe think that Bordeaux is a bit stuffy, or that Bordeaux is the wine that their parents used to drink. We have to approach them and explain to them that even if this is a very expensive bottle of wine, it’s more than that.

“My vision for Lafite is to explain to these potential Lafite-lovers what we’re doing. To really open our doors in an unpretentious way, to show them what Lafite is – which is an agricultural estate, dependent on nature, at the mercy of hail and storms, and producing one of the best wines in the world.”

Pauillac is a long way from the Ivory Coast, but Saskia has settled well here. “My main love in life is to write and to tell stories. So I sometimes miss that, but at the same time: I live in the country. I have this sense of place. And I have this extraordinary team of people, who teach me things every day. It’s a great opportunity.”