Château d'Armailhac:
digging into the detail

A tree-lined pathway connects Château d’Armailhac with Château Mouton Rothschild, but it has an identity all of its own. Here, the estate’s new director, Lucie Lauilhé, digs into the detail

Lucie Lauilhé is now six months into the job of leading Château d’Armailhac, part of the Baron Philippe de Rothschild S.A. stable of Classified Growths. Though young, Lucie boasts an impressive resumé and has considerable technical chops in both the vineyard and the winery. For much of her career, she has studied the link between vineyards and their soils and, ultimately, what that means for the wine. 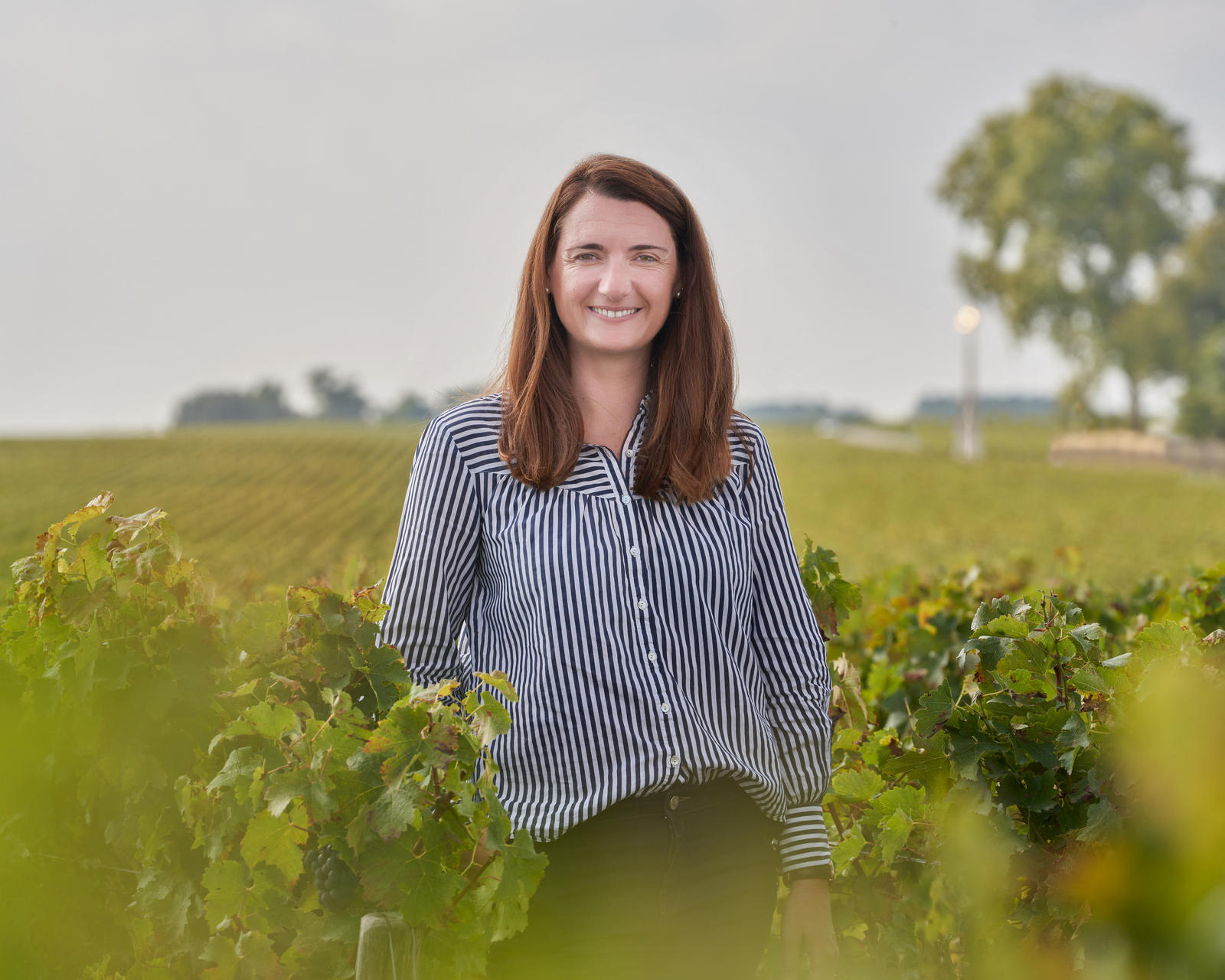 Lucie Lauilhé, the new director at Ch. d’Armailhac, stepped into her role in August

Her arrival here wasn’t “a clean slate or a blank page”, Lucie says. Her predecessor, Jean-Paul Polaert, retired in January after nearly 20 years running the estate. The two worked side-by-side for four months, and ran the 2021 harvest together, before Lucie took the reins completely. This handover period ensured that Lucie could hit the ground running, she explains. “He shared all the secrets with me. I asked a lot of questions. We didn’t lose any time.”

Pauillac is among the world’s most coveted winegrowing areas, and the northern sector in which Ch. d’Armailhac lies is especially favourable. A pristine, tree-lined pathway connects Ch. d’Armailhac with its First Growth sibling, Château Mouton Rothschild. For a seasoned viticulturist and soil expert, the 80-hectare vineyard offers much intrigue. Naturally, Lucie and the team work at the level of the individual parcel – impressive considering the scale of the operation. “Just because we’ve got a large surface area doesn’t mean we can’t go into detail,” she says.

Cabernet Sauvignon is the most planted grape; this is Pauillac, after all. But there are also relatively high proportions of Merlot and Cabernet Franc. Lucie considers the latter a specificity of the estate and an important part of its historical heritage. It may also have an important part to play in the property’s future, too. “We want to continue exploring its potential,” she says. “It works really well here, and it brings a lot of aromas and character to the wine.” 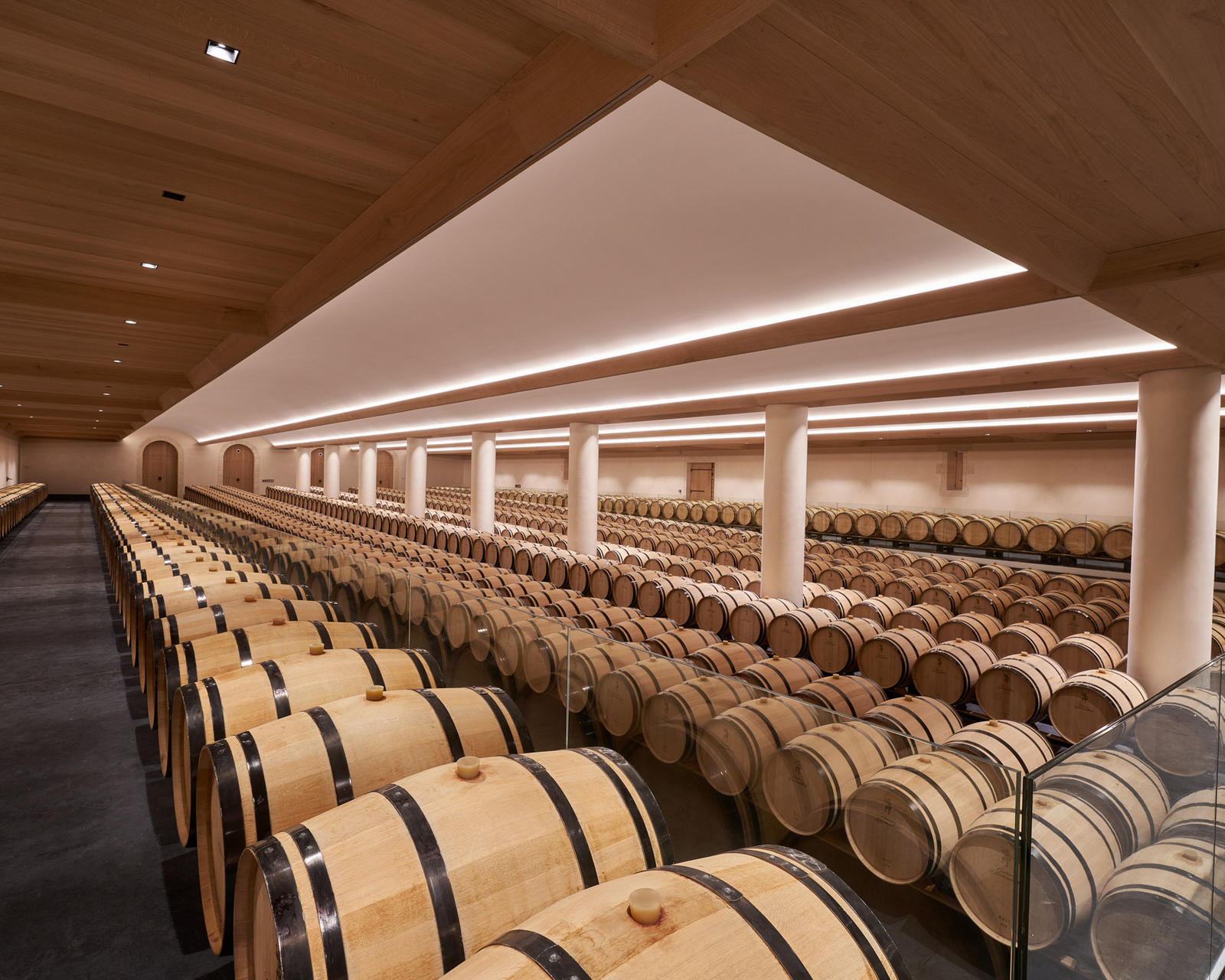 Investment in the facilities here is yielding results: the new cellars are both impressive and practical

There is a new cellar here, which proved invaluable at harvest time: the team were able to process batches quickly and efficiently across two sorting lines, providing flexibility to adapt to the climate conditions. The new cellar building may be the culmination of it, but there has been transformative work underway here for about 10 years, Lucie says. Extraction is varied depending on the characteristics of the grapes; a one-size-fits-all approach this is not. Oak maturation is considered carefully: how much new oak is used, and the length of maturation, are tailored to the profile of the vintage. “If a vintage is warmer or cooler, we can adapt the barrels to the vintage conditions,” she says. Experiments with amphorae and other containers are underway, too.

The new building has been constructed to optimise the working conditions. Grape reception has been greatly improved, “giving us more flexibility, depending on the vintage and the speed we need to harvest at.” They have increased their quantity of stainless-steel vats, now with 50 vats of capacities ranging from 75 to 240 hectolitres. “Today, it’s completely open, enabling us to work in the best conditions.”

Solar panels on the roof mean that the cellar is almost fully self-sufficient, Lucie explains. Better thermoregulation and insulation have also cut their heating waste considerably, and they have a system of collecting CO2 in the cellar. “These advances are possible thanks to the willingness of the Rothschild family to invest in this estate as well as in Châteaux Clerc Milon and Mouton Rothschild,” Lucie adds.

“We must respect the place, the environment and, especially, the heritage. We don't produce wine for just one vintage; in 50 years, we'll still be producing wine here” 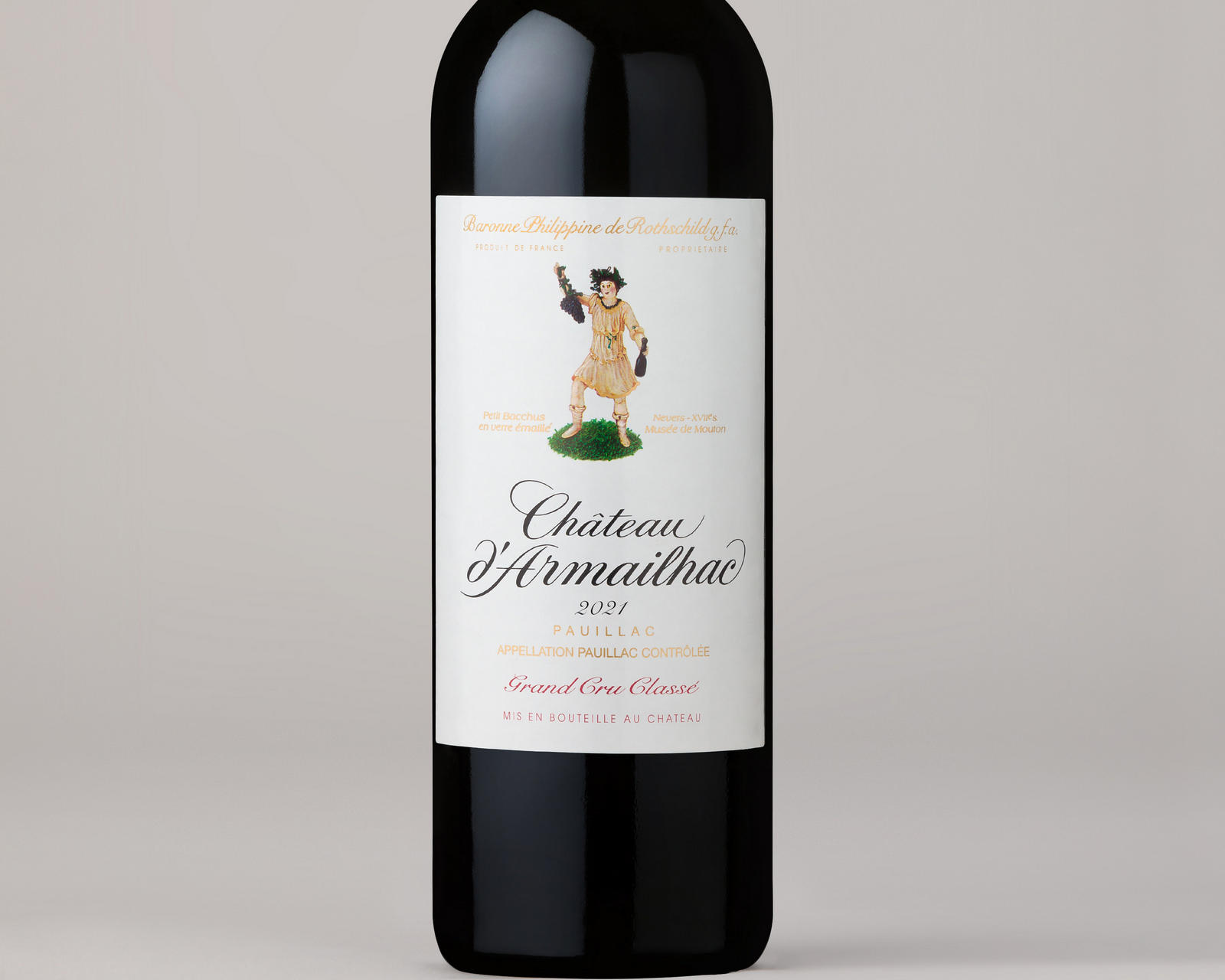 The three vintages that preceded Lucie’s arrival at Ch. d’Armailhac were exceptional, notably for their hot, dry weather. “That’s not always the case in Bordeaux,” says Lucie, who was managing Château Patache d’Aux in the northern Médoc at the time. But while they were “easy vintages” to manage, they weren’t exactly reflective of the region she has come to know. Her inaugural vintage at Ch. d’Armailhac was different: “2021 took us back to Bordeaux,” she says. Buds burst relatively early, though the cool summer meant that the grapes took longer to reach maturity.

“We had to be patient,” she says. “These vintages are called ‘terroir vintages’, as the soils will have a big influence on the quality. In exceptional vintages, all terroirs yield fantastic grapes. In fresher, more challenging vintages like 2021 is where terroir will make the difference.” When the spring frosts hit Bordeaux, Ch. d’Armailhac was spared thanks to its proximity to the Gironde estuary. The gravel soils were particularly favourable in retaining heat amid cooler temperatures, she explains.

Harvest at Ch. d’Armailhac came relatively late and was over quickly: it started on 28th September and finished on 8th October. The different parcels here reach maturity at different times, Lucie explains, which lends itself to a well-paced harvest without the need to rush. Were everything to mature at once, there would be a scramble to pick it all immediately. Here, “harvest was continuous. The soils allow the grapes to mature at different speeds.” 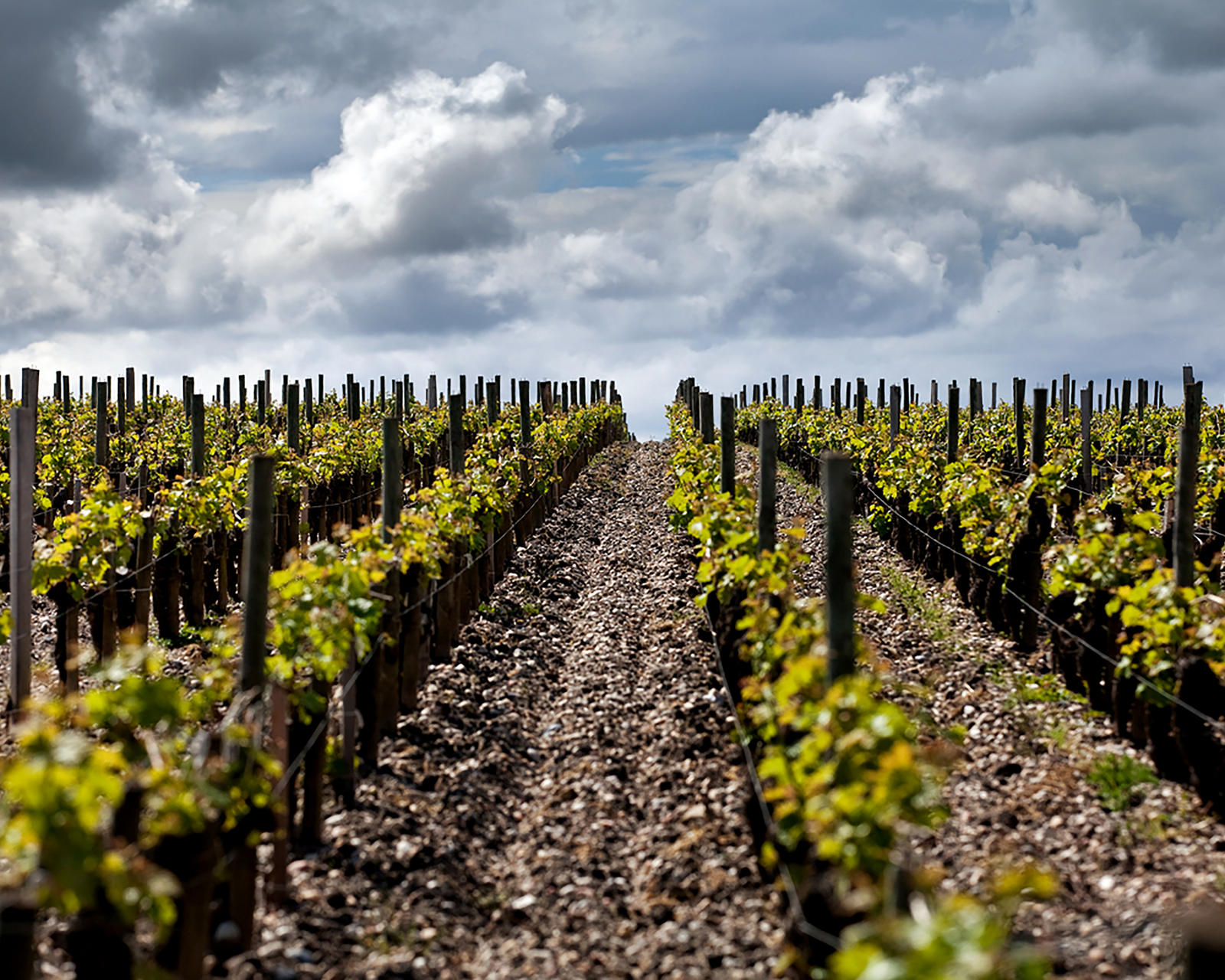 Ch. d’Armailhac may be a new project for Lucie, but she is already well acquainted with the Médoc’s deep gravel soils

THE POTENTIAL TO AGE

Lucie has completed her first harvest here. “But one harvest is just the start of beginning to understand the wine and terroir,” she says. She and the team recently conducted a vertical tasting of Ch. d’Armailhac’s vintages from 1976 to the present day, to observe how things have evolved over 36 years. “What I noticed the most were the old vintages. Those that were 20 years old tasted 10 years old; these wines have enormous ageing potential. Tasting these wines gives me an idea of how the vineyard and the soils give an identity to the wine.”

Ch. d’Armailhac is a unique patch of land, long recognised for producing great wine. “It is a perfect illustration of the terroirs of Pauillac,” says Lucie. “This diversity of terroir allows us to moderate the vintage effect here. We must respect the place, the environment and, especially, the heritage. We don’t produce wine for just one vintage; in 50 years, we’ll still be producing wine here.”