Carbon negative, recyclable, natural – not to mention the best-possible closure for fine wine – there are countless reasons to love cork. Here, Adam Holden shares the good news: pulling a cork from a bottle is a small, but important, step towards drinking wine sustainably

Wine and cork have long been bedfellows. In the Ancient world, the Greeks and Romans used cork stoppers to protect wine stored in clay amphorae. It’s light, flexible and impermeable – which means it’s also slow to decay. It should come as no surprise then that this millennia-old technology is still the preferred way to preserve and protect fine wines as they gently mature.

Falling out of favour

The story of cork has not always been one of success. In the 1980s and 1990s, a surge in the problem of cork taint – caused by malevolent compound 2,4,6-Trichloroanisole (TCA) – forced producers to look for alternative bottle closures. So potent is TCA, that even minuscule amounts on a cork can give wine an unpleasant, wet-cardboard-like aroma.

In response to this disastrous quality-control issue, the cork industry invested huge amounts of effort and research into combating the TCA problem. Meanwhile, a multitude of alternative closure solutions emerged, from the environmentally disastrous plastic cork (or “co-extruded plastic stopper”) to the enduringly successful screwcap. Natural cork quickly lost ground against these emerging technologies.

Over the last three decades, the cork-taint situation has been steadily improving. In 2020, our cork partner Amorim perfected a steam sanitisation process which has reduced its rate of TCA infection almost to the point of elimination. This is excellent news for the 5.5 billion stoppers the company produces annually.

There would have been a time when opting to close a cellar-worthy fine wine with anything other than a natural cork would have raised an eyebrow. These days, it’s a more nuanced debate. “Technical” synthetic stoppers have developed to the point where the winemaker can select their closure based on the amount of air exchange they require. Not to be outdone, cork technology has advanced in the same way.

Regardless of how far technology can take us, cork’s natural ability to properly seal a bottle while also allowing subtle breathing to occur is hard to replicate. And it’s genuinely important. As a bottle ages in your cellar, gentle oxidation of the tannins slowly softens the wine, building complexity. The tiny volume of oxygen ingress also helps prevent the build-up of funky aromas which come from anaerobic ageing.

Of course, detractors will always point to the fact that a natural product like cork can give unpredictable results. Today, this just isn’t the case: high quality wines are closed with impeccably produced corks. And, in any case, isn’t a tolerable degree of variety part of the joy of wine? It is, after all, an agricultural product itself.

Cork is made from the bark of the cork oak (Quercus suber). For most trees, stripping their bark (a process known as girding) is a sure-fire way to kill them. But the cork oak is different. It’s unique in its ability to replenish its bark, making it a truly renewable resource. This is thanks to the fact that the layer harvested is the tree’s second bark – a special defence layer – rather than the carrier of nutrients. The tree can survive without it, and simply rebuilds it over the course of a decade or so.

Cork harvest takes place in late summer. A huge amount of skill is required to make sure that the inner bark is not damaged; usually it’s done using hand tools. This craft is one of the best-paid agricultural jobs in the world. It’s a trade which is passed from generation to generation, making it economically, culturally and socially significant. Perhaps it’s a romantic notion but, in some way, these forests protect an ancient way of life.

Cork forests are also one of the world’s 36 biodiversity hotspots. They’ve been identified by the UN as both biologically rich with endemic, irreplaceable plants, and also under threat. Less than 30% of their original natural vegetation remains. Among the dozens of significant species which rely on this ecosystem are the endangered Iberian lynx, not to mention an enormous array of other mammals, reptiles, amphibians, birds, insects, invertebrates, other flora and fungi.

The cork trees – which, incidentally, survived the ice age thanks to the incredible insulation properties of cork bark – have become perfectly adapted to their environment over a period of more than 10 million years. They place little demand on water in the arid areas where they grow. They protect against soil erosion and mitigate the threat of forest and wildfires. The cork oaks’ fight against desertification in North Africa is cast in powerful imagery; they appear to stand as the final legion of defence against the advancing Sahara. 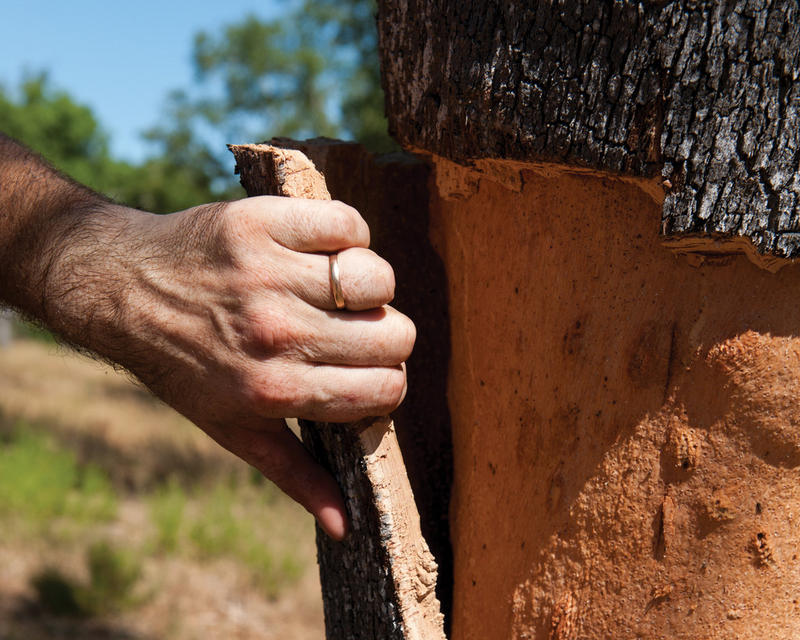 01: It takes 25 years for a tree to become mature enough to harvest for high-quality cork. Photographs by Amorim

A landscape in peril

But this ancient landscape is under threat. The single, supreme danger to cork forests is their commercial viability. Typically, a cork tree will provide a first usable harvest at 25 years of age. However, it’s not until the tree reaches 43 years old that the bark becomes sufficiently thick, and of a high enough quality, to be used as a fine-wine stopper. While cork is an endlessly versatile product, the manufacture of high-quality wine stoppers is a disproportionately valuable source of revenue when compared to its other uses.

Making a living from growing and managing a cork oak forest is not an easy one. If you were starting from scratch today, you would be making an investment for your grandchildren rather than yourself. Because of this, many farmers prefer to use their land for crops that give a faster return. For example, fast-growing and easily monetised non-native plants such as eucalyptus are valuable for paper pulp.

But eucalyptus doesn’t suit Portugal’s natural ecosystem. It is very thirsty, using scarce groundwater, and it burns alarmingly easily and with ferocious intensity. It also supports a fraction of the biodiversity of a cork forest. Plus, since the eucalyptus harvest simply means cutting the trees down, it does not support the skilled workforce in the same way as cork.

As a fine wine lover, when you buy wine with a cork closure you’re doing your bit to support this incredibly precious industry. And when you reach for the corkscrew, open the wine and then recycle the cork, you’re doing even more. If only all green initiatives were as simple.

Certainly, as a wine merchant we take our responsibility seriously: by supporting cork farmers, and by favouring natural cork, we can help make cork oak a more economically viable product. In turn, this means we can help to protect and expand the vital cork forest ecosystem.

And the benefits are not only in the forest. A life cycle analysis of cork wine stoppers, commissioned by cork producer Amorim, has shown that each natural cork stopper has a CO2 balance as high as -309gr of CO2. As the trees replenish their bark, they lock up more carbon to be harvested again nine to 12 years later. One hectare (0.4 of an acre) of cork forest draws down nearly 15 tonnes of CO2 in a single year. In contrast, a screwcap closure generates 25 times more CO2.

With a growing awareness of the environment and the impact our lives have on the planet, the restoration of wine producers’ and enthusiasts’ faith in cork can’t come soon enough. This year, we’ve begun a project to move our Berry Bros. & Rudd Own Selection wines to 100% natural cork wherever feasible. It’s a small but important gesture – and it’ll make pulling the cork all the more satisfying.

Our producers and sustainability

Find out about our ambitious targets, and how we plan to meet them