Why Christmas calls for Champagne

Celebrate the joy of festive bubbles with stories and advice from our experts.


Champagne is perhaps the quintessential Christmas wine. Below, you’ll find a short collection of writing that captures the spirit of uncorking Champagne at Christmas. Dip into Champagne’s festive history, discover some food-matching advice and try out a stunningly simple recipe for “Oysters Christian Dior” from our Michelin-trained chef.

A magic carpet of Champagne

A tale as old
as France

How to match your Champagne to food

A magic carpet
of Champagne 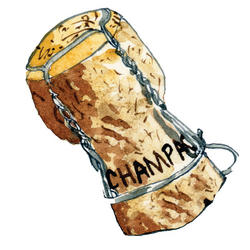 For Alexandra Gray de Walden, Champagne is uniquely versatile, pairing beautifully with everything from Christmas breakfast to ripped wrapping paper and muddy wellies.

What is the first sign of Christmas Day in your household? In mine, it’s that unmistakable pop; that release of lively effervescence as a caged cork escapes from the neck of a Champagne bottle, bedecked in its foil cloak. Sometimes it appears as early as 7am as the liquid accompaniment to our traditional Christmas Day breakfast of smoked salmon and scrambled eggs. It signals the arrival of family, thorough relaxation and the start of a very special day. No wonder Noël Coward wittily proclaimed: “Why do I drink Champagne for breakfast? Doesn’t everyone?”.

But while ante meridiem drinking may not be for everyone (apologies, Mr Coward), the joy of Champagne is its suitability for any time of day. Whether your household prefers to make an occasion of Christmas lunch or of Christmas dinner, nothing says “celebration” or “togetherness” quite as festively as a twinkling glass of Champagne. It has the unmatched ability to carry you on a magic carpet of fine mousse from Christmas Eve through to Boxing Day – and beyond. And it pairs beautifully with ripped wrapping paper, The Queen’s Speech and the kicking-off of wellies after a Boxing Day hike.

While Champagne facilitates the annual celebration of Christmas, it also creates its own Yuletide memories. I shall never forget a childhood Christmas spent in Moscow when numerous bottles of Bollinger were chilled in the snow in our garden for Christmas lunch, owing to a lack of space in the already bulging fridge.

For superlative seasonal sipping, nothing will add a sparkle to your Christmas quite like Champagne.

A tale as old as France 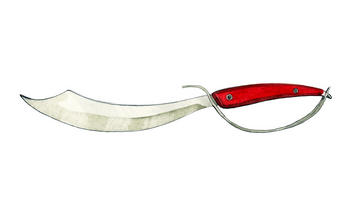 Champagne enjoys an unmatched reputation as the go-to celebration wine, built on centuries of festive associations. Adam Holden shines a light on the best-known historical moments which have helped to shape an iconic legacy.

For as long as it’s existed as a sparkling wine, Champagne has been inextricably linked to festivity, celebration and the grandest of occasions. Perhaps the link is as old as France itself. Clovis I was baptised in the Cathedral of Reims on Christmas Day in 466AD, where he was later coronated as the first king of the united Franks. Celebrations were well oiled with what would then have been the still wines of Champagne.

With the addition of bubbles, these rather thin, acidic, still wines from the cold vineyards of Champagne found their raison d'être; with much of the credit going to the famous Dom Pérignon himself. If not for him, perhaps we wouldn’t be able to enjoy the luxury of Champagne’s frothing mousse today.

The first aristocrats to enjoy this novel, bubbly wine appreciated its liveliness almost more than the wine itself. It rarely made it anywhere near the glass: the unpredictable expulsion of a pent-up bottle was frequently used to douse guests for festive entertainment – a tradition which is mercifully less common today, accept among Formula One drivers.

As if this were not theatre enough, we can further indulge an impulse for festive showmanship by reaching for the sabre. The practice of sabrage, which was favoured by Napoleon and his captains, involves running a sword along the bottle to make contact with the lip and send the collar and the cork flying as one. It certainly adds to the sense of occasion – be sure to equip all bystanders with essential eye protection or the laughter may turn to tears.

Far from being reserved only for victories, Napoleon considered defeat just as good an excuse for a glass of Champagne. Louis XVI would probably relate to this sentiment, having drunk generous amounts of Champagne just before losing his head to the guillotine.

A century later, the Widow Clicquot (of iconic label Veuve Clicquot) spared no effort in making the manufacture process for Champagne easier and more consistent. Her revolutionary process of removing the dead yeast cells which remained from the second fermentation (critically, without losing too much wine or causing it to go flat) allowed Champagne to reach a far wider audience.

Once the sole preserve of royalty, an increasingly affluent middle class could now access this noble delicacy. Still, its associations with aristocracy and grandeur have endured, and have us reaching for our sabres on our most treasured occasions. There are few better reasons to indulge a lavish impulse than gathering with loved ones on Christmas Day.

How to match your Champagne to food 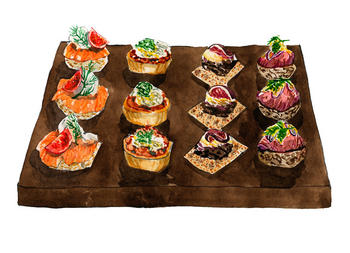 We tend to think of Champagne solely as an apéritif; a sparkling start to a meal. But, in fact, it pairs brilliantly with a range of dishes. Henrietta Gullifer shares a few key tips for matching Champagne to food.

Champagne has a naturally high acidity caused by the early harvest and cool climate in Champagne. Not only does this enhance the wine, making it refreshing and palate-cleansing, but it also helps it pair incredibly well with anything salty or fatty, as the acidity cuts right through the richness of a dish.

This lends itself to traditional pairings such as smoked salmon blinis, but it can also allow you to get a bit more creative. For example, you could serve the Champagne with the cheese course; some delicious nutty Comté pairs wonderfully with the buttery notes in a richer style of Champagne. It even goes well with deep-fried food, possibly some arancini or Spanish croquettes.

Not all Champagnes are the same, of course. Younger, fruitier, non-vintage styles are great with fresher flavours, such as seafood or a zesty market salad. Vintage Champagnes tend to have a bit more weight, developing savoury flavours over time; this could allow you to explore umami flavours such as mushrooms or even meat-based dishes.

If you’re looking for something different to finish your meal off, you might want to explore the demi-sec styles of Champagne. While it may be a little too light for a traditional Christmas pudding, these styles have slightly more residual sugar in them and can go perfectly with desserts such as fruit tarts or a Christmas pavlova. 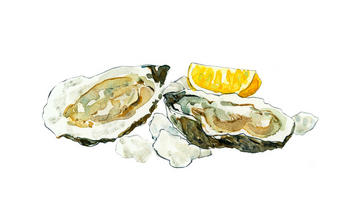 Stewart Turner, our Michelin-trained chef, has plenty of tricks up his sleeve when it comes to creating festive dishes with a special touch. Here, he shares a simple (yet appropriately decadent) recipe that’s perfect with Champagne.

When it comes to food and wine, I don’t think there is a more intuitive match than Champagne and oysters. Oysters are a big Christmas special for a lot of people and this dish combines the two. It’s a classic from my days at The Connaught Hotel, mysteriously named “Oysters Christian Dior” – which is basically oysters with Champagne sabayon and the optional addition of black truffle.

Shuck the oysters and retain the water and the bottom shell. The tops can be discarded. Place the shells on a bed of salt on a baking tray.

Strain the oyster water through a very fine sieve or muslin into a small saucepan. Add the Champagne, bring it to the boil and reduce the liquid by half. Once reduced, place the mixture in a heatproof mixing bowl with the egg yolks and sit this on top of a pan of boiling water. Continue whisking vigorously for about three minutes, or until the mixture thickens, then take it off the heat and immediately whisk in the whipped cream and chives.

Fill the shells with a little wilted spinach and nestle the oysters on the top. Spoon over the sabayon mixture and place the oysters until a hot grill for two to three minutes until has a lovely golden-brown colour. Finish with the truffle (if you’re using it) and serve immediately.

Bottles to celebrate with