Good Ordinary Claret is a wine inextricably woven into our brand story and heritage. The label itself makes this clear from the outset: a monochrome etching of No.3 St James’s Street set against a simple black-and-white background with our name proudly stamped beneath it, and the words “Good Ordinary Claret” – beguilingly straightforward yet full of confidence.

Not every wine has to be the best example of its type, and Good Ordinary Claret is one such wine. “It was Claret, it was good and it was ordinary,” says Christopher Berry Green.

“I remember speaking to a Marketing guru at the time, and he said, ‘You’ll never sell a wine with ‘ordinary’ in the name.’ In fact, we sold more Good Ordinary Claret in its first year than all our other Clarets put together."

From London Shop to Chairman

Christopher, now retired, began working at Berry Bros. & Rudd in 1954. He started his career in the London Shop, where he had a desk for ten years. “You had all sorts of customers coming in back then – from the theatrical world, the medical world, the political world,” he recalls warmly. “I enjoyed our customers, and I took great pride in knowing their names. A few could be a little difficult, but not many.”

Subsequently, he took on various responsibilities throughout the decades that followed, including arranging samples of new vintages from across Europe (“That’s how I learned how to choose and taste young wine”), managing and decanting the lunch wines for directors and guests, and overseeing the bottling of wine on Berry Bros. & Rudd premises in London and Basingstoke.

Christopher became Managing Director in 1985, Deputy Chairman in 1992 and Chairman in 2000, eventually retiring in 2004. One of the ground-breaking projects he oversaw throughout his long tenure was the development of Good Ordinary Claret – our flagship red Bordeaux – in the 1970s.

The history of Good Ordinary Claret is rooted in Britain’s relations with Europe; now, as the technicalities of Brexit start to become clearer, it feels like an interesting time to revisit its roots.

It was 1973, Christopher tells me, and the UK was in the process of joining what was then known as the Common Market or the European Economic Community, a precursor to the European Union. As a result, the wines Berry Bros. & Rudd purchased from Bordeaux – and France in general – had to be subject to the French laws of appellation contrôlée (AC).

The introduction of these laws to the UK market meant that the cost of French wine sold in the UK shot up significantly. “Something that we could sell before 1973 for eight shillings and sixpence suddenly went up to 12 shillings,” says Christopher, “So, we needed to look for a Bordeaux wine that we could sell under our own label at a lower price.”

The search began. “We did a lot of tasting; in those days, we always tasted in the country of origin, followed by a final tasting in London or Basingstoke. It was important to taste in two places: the same wine you taste in St Julien on a sunny afternoon will taste quite different in Basingstoke on a foggy November morning.”

Settling on a name

“Our regular suppliers produced samples of red Bordeaux AC wine, which we tasted initially in Bordeaux. Samples were then sent to London, we tasted again and made our final choice,” says Christopher, “I remember going to see Anthony Berry, who was Chairman at the time. I said, ‘We’ve got the wine – now what we need is a name.’

“So, he looked at me and he said – as Tony Berry always did – ‘Have you got any ideas?’ I had a copy of the company’s 1896 pricelist, which was a little three-fold paper pamphlet. Under the Clarets, the three least expensive wines were listed without any denomination or geographical allegiance. They simply read: ‘Ordinary’, ‘Good’ and ‘Better’. So, I said to the Chairman, ‘What about Good Ordinary Claret? After all, what is it? It’s Claret, it’s good and it’s ordinary.’”

And so, the name of our signature Bordeaux was assembled from the least expensive Clarets listed in the company’s 1896 pricelist. Anthony Berry wasn’t initially convinced by the choice of name, but those doubts must quickly have dissipated as the wine went on to sell more in its first year than the other Clarets combined.

So, what is it about the name Good Ordinary Claret that is so appealing to Berry Bros. & Rudd’s customers?

“The name personifies Berry Bros. & Rudd from the perspective of authenticity,” says Christopher. “It’s not pretending to be something it’s not. There's also that sense of British understatement."

It’s perhaps in its understatement that the name communicates confidence: the implication of something very good hiding behind a modest façade. 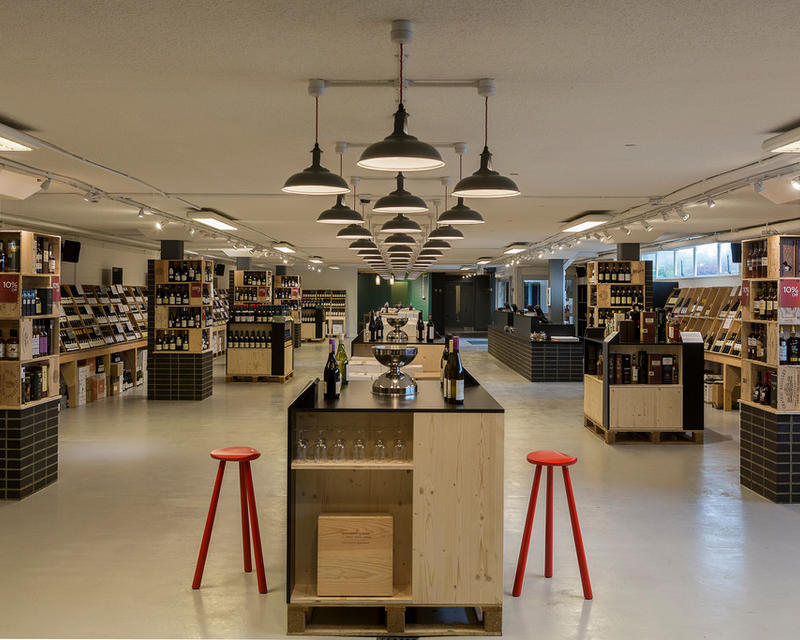 Wines used to be bottled on the site of our Warehouse Shop in Basingstoke, before bottling on premises ceased in the 1970s

In the early days, Good Ordinary Claret was bottled on Berry Bros. & Rudd premises in Basingstoke. “For hundreds of years, we always shipped our wines in cask and bottled in our own cellars,” explains Christopher. “The late Peter Sichel – part-owner of Château Palmer and the owner of Château Angludet – said that our bottling was better than château bottling, a very high accolade. It may have been said with his tongue in his cheek, but it was true,” he adds with a chuckle.

But the tradition of bottling on Berry Bros. & Rudd premises ended abruptly in the 1970s. Word came from Bordeaux that wines would no longer be shipped in bulk, and the region’s wines would in future be bottled at the châteaux.

“I remember going out to Bordeaux in high dudgeon. Peter Sichel kindly arranged a meeting at Angludet to meet eight or nine proprietors of the major châteaux. I made the case that BB&R should be allowed to continue bottling as we had always done, which they agreed had always been to the highest standard.

“But they were worried about what was happening in other European markets, where there was evidence of wines being ‘stretched’. What this means is that a merchant would buy three hogsheads of Château X, and when they bottled it, they’d have the equivalent of rather more than three hogsheads – they were carrying out some surreptitious blending. As a result, the Bordeaux proprietors decided they would no longer ship their wines in cask, and that was the start of everything being bottled at source.”

During Christopher’s directorship, Good Ordinary Claret was produced by Borie-Manoux, headed up at the time by Emile Castéja, whom Christopher describes as a close partner both in business and friendship. The wine is now produced by Dourthe, a family-run négociant who own and manage a number of leading châteaux in Bordeaux – such as Château Belgrave – and specialise in high-quality blends from across the region. 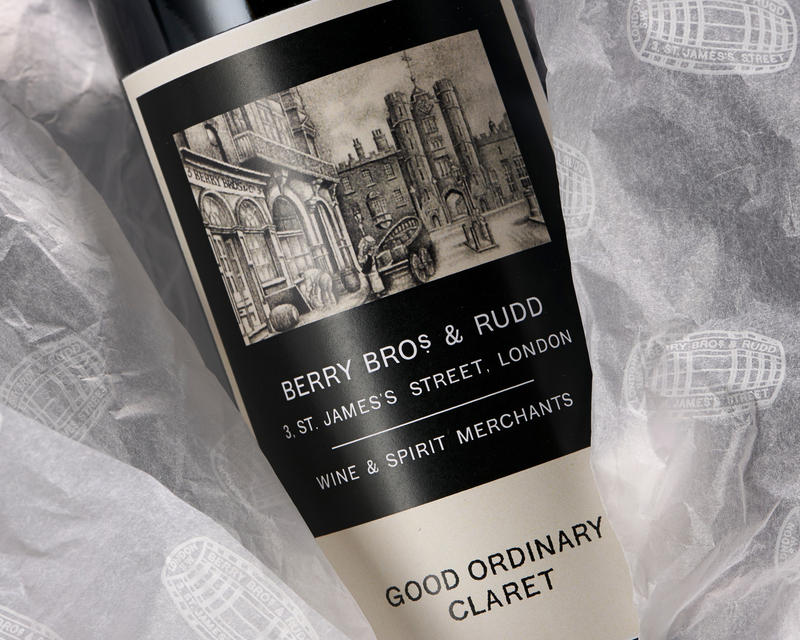 The label is crucial in anchoring Good Ordinary Claret to the heart of Berry Bros. & Rudd at No.3 St James’s Street. Was that a deliberate choice in the early days?

“Back then, the wines we bottled either had a ‘view’ label or a ‘map’ label. For a lot of our wines, particularly Burgundy and Rhône, we developed a map of the region. But for Bordeaux, we always had a traditional Berry Bros. & Rudd view label of St James’s Street and the shop.”

The view label was considered a stamp of authenticity: a way of communicating that what’s inside the bottle is reliable, good-quality and good value for money. It’s this consistency, Christopher says, which builds trust between our customers and the company in the long term.

“Good Ordinary Claret, to me, is about quality, reliability and style. It encapsulates who we are as a brand: our reputation for quality, good business management and always putting the customer first.”

It’s undoubtable that these qualities shine through our signature wine: a pure expression of Christopher’s legacy that continues to be savoured by Berry Bros. & Rudd customers, staff and family-members alike.

Since 2016, we’ve celebrated our flagship Claret through an annual collaboration with a different artist or designer to reimagine what has become an iconic label. Our latest label is a typographic design by Poppy Lennox, which you can find here. 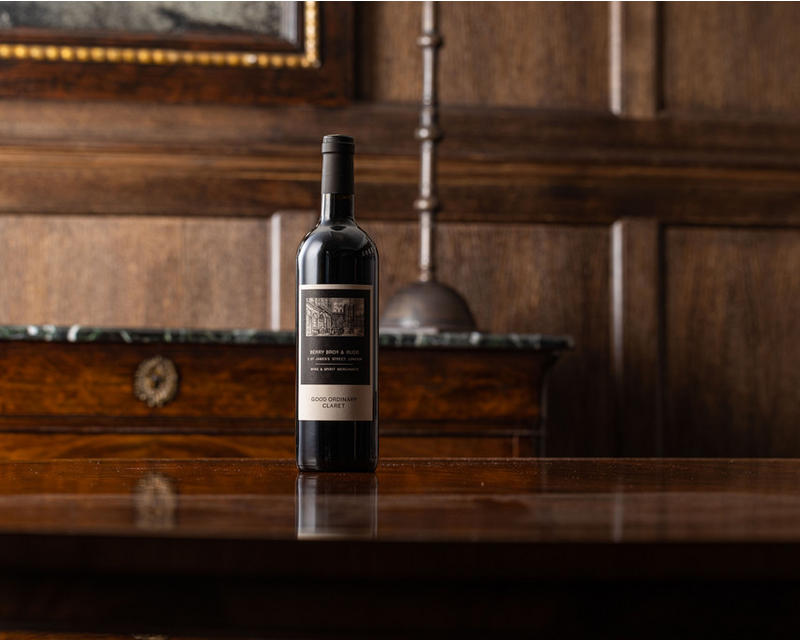