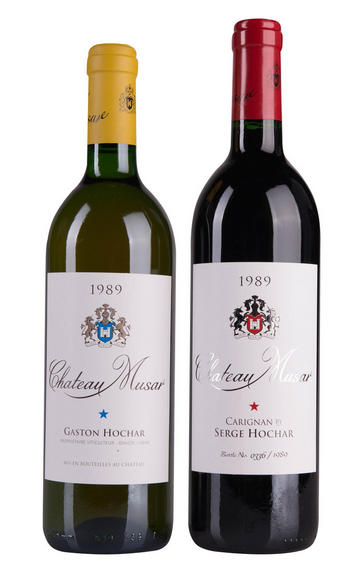 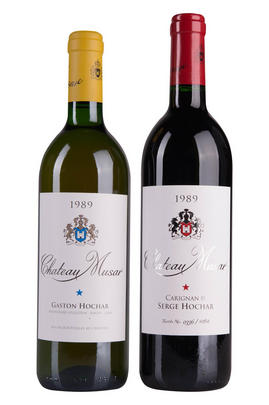 This two-bottle case was released to celebrate the 50th anniversary of Château Musar, the iconic Lebanese wine estate. 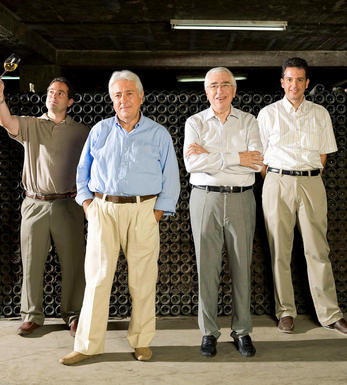 Château Musar was established by Gaston Hochar in 1930 and is without doubt Lebanon's top wine estate. Few properties have consistently produced such high quality wines in the face of adversity and war, and it is a testament to the sheer will and determination of the Hochars that wine has been produced every single year, bar 1976 and 1984.

The property is located in Ghazir, 15 miles north of Beirut overlooking the Mediterranean, whereas the vineyards themselves are located a long and sometimes dangerous truck journey over the mountains to the east of Beirut in the Beqaa (aka Bekaa) Valley. The vineyards benefit from an altitude of around 1000 metres and the subsequent cool nights serve to lengthen the crucial ripening process.

The red is a blend of Cabernet Sauvignon, Carignan and Cinsault. Serge Hochar, who has been involved with the property since 1959, states that the Cabernet Sauvignon provides "the bones and the skeleton to the wine, the Carignan the flesh and muscle and the Cinsault the silky smooth finesse".

Musar wines are unique in that Hochar blends the varietals only after they have spent three years in barrels and then waits a further four years before releasing the end result. This gives time for each variety to unfold its own character. The wines are extremely long-lived, with the best examples lasting for 20-30 years. 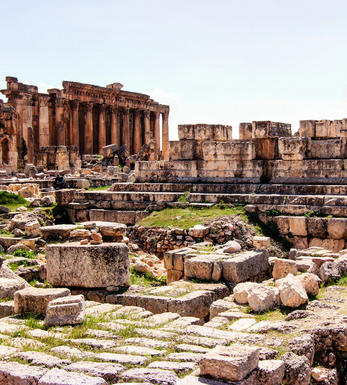 Lebanon boasts probably the longest established winemaking heritage in the world. Vines of vitis vinifera are thought to have first been introduced in the region by traders from South Caucasus via Mesopotamia or the Black Sea.

The wines of Tyre and Sidon were famous throughout the Mediterranean. Wine was an important element of the Phoenician religion, and the Greek god of antiquity Dionysus (known to the Romans as Bacchus) is believed to have originated in the wine rituals of Canaan, the region roughly encompassing present-day Israel, along with coastal land from Syria and Lebanon. The Phoenicians, the ancient inhabitants of Lebanon and celebrated traders and sailors of the time, played a key role in spreading wine consumption and viticulture throughout the Mediterranean. Historical records indicate that the wines of the ancient region of Byblos (aka Gubla, Gebal, Jubail, Jbeil) in Lebanon were exported to Egypt during the Old Kingdom (2686 BC-2134 BC).


The local wine trade has overcome several setbacks over the centuries: production was curbed, albeit tolerated for religious rituals, when Lebanon was under the rule of the Caliphate. Winemaking blossomed in the late 1800s – in 1857 Jesuit monks planted Cinsault vines from Algeria and founded Château Ksara in the central Beqaa Valley. A string of new wineries followed, among them Domaine des Tourelles.

Gaston Hochar's celebrated Château Musar was a late arrival on the scene, in 1930, but its meteoric rise has seen it become one of the iconic Lebanese wines in the Western markets.

Despite the adverse effects from the frequent conflicts in the region (chiefly vineyard destruction and immigration), the resilience and dedication of Lebanon's winemakers has kept winemaking traditions there alive, with annual production levels in recent times achieving between 400,000 and 700,000 cases. During the Lebanese Civil War in the 1980s, Gaston Hochar was famous for transporting his grapes across the front lines which separated his vineyards from the winery.

However Lebanon also has a wealth of unique, indigenous grapes and efforts are being made to exploit their potential. For instance, Château Musar White employs a blend of Obaideh and Merwah grapes, the former believed to be an ancestor of Chardonnay.

The fertile Beqaa Valley is the heartland of Lebanese wine production and home to the Château Musar  Château Kefraya, Château Ksara and Massaya. Founded in the mid '90s by Ramzi and Sami Ghosn in a joint venture with the Brunier brothers of Domaine Vieux Télégraphe and Dominique Hébrard of Maison Hébrard, Massaya is a boutique winery that has been making waves in the French market.

The Wine Advocate92/100
The 1989 White is Obaideh (60%) and Merwah (40%), oak fermented. I have not always been a big admirer of Musars whites, but, like Musars reds, they are late released and considered quite ageworthy. Here is some proof. This 1989 is wonderful, a lovely vintage for this wine, beautifully constructed, solid but balanced, with fine concentration and strong, complex flavors. Fresh and youthful, with many years ahead of it, I suspect this would be a bigger star and a very famous wine if it happened to say Rhone Valley on the label instead of Lebanon. So it goes with emerging regions, or, as President Kennedy once famously said, Life is unfair. Im conservative on drinking windows by nature, preferring to reevaluate in stages where doubt exists, but this vigorous and exceptional white shows no signs of giving up the ghost any time soon. Drink now-2020.
Mark Squires - 28/06/2013 Read more