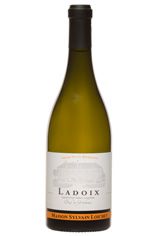 This has all the usual weight and charm of this favourite cuvée, with gorgeous exotic fruit, very sensual yet fresh behind. A very beautiful glass of white wine.
Jasper Morris MW, Burgundy Wine Director

The new premises in Chorey-lès-Beaune remain something of a building site externally. However, inside everything is in place for making fine wine, while upstairs an apartment has almost been completed for Sylvain, his wife and new baby. The whites have been a great success here since Sylvain’s first vintage (2007), while 2012 marks huge progress on the red wine front. A refined approach to the vinification process has produced much more perfumed fruit and has avoided the reductive aromas which sometimes used to appear.

The Ladoix appellation is designated for red and white (from Pinot Noir and Chardonnay respectively)  wines produced  in the commune of Ladoix-Serrigny in Côte de Beaune of Burgundy.

Red wines are in the majority (three-quarters) . Some of the Premier Cru vineyards of Ladoix-Serrigny are part of the Aloxe-Corton AOC of the neighbouring village rather than of Ladoix AOC, and vinified and sold as Aloxe-Corton Premier Cru.

There are 11 climats within the Ladoix AOC that are designated as Premier Cru vineyards:

The Grand Cru appellations of the Corton hill are overlapping in some areas, and are shared among three communes; Pernand-Vergelesses, Aloxe-Corton (major part) and Ladoix-Serrigny. Hence some of the Corton and Aloxe Corton vineyards which partially fall within Ladoix-Serrigny may be used for both red and white wine.
View Region
Storage Details
Storage in BB&R Warehouses