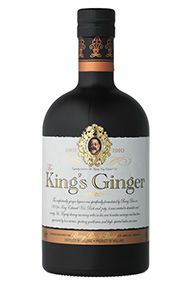 The King’s Ginger is a liqueur which was specifically formulated by Berry Bros. & Rudd in 1903 for King Edward VII. Rich and zesty, it was created to stimulate and revivify His Majesty and has been appreciated by bon viveurs ever since.  A fiery ginger spirit enlivened by a hit of zesty lemon, this is best enjoyed both on its own or in cocktails.

Other - Sip this strong, sweet elixir of ginger at room temperature with Christmas cake or sticky ginger cake, and use in desserts and whisky cocktails, too
Suzy Atkins - Sauce - Sunday Telegraph - 16-Dec-2012

Riven with the intense, luxuriant fire of ginger and cut across with the bright bitterness of lemon, this rich and sweet liqueur was formulated at the turn of the 20th century to keep Edward VII on his toes during carriage rides in the cold. It would be well-recieved by hip flask owners.
Victoria Moore, The Daily Telegraph, 24 December 2011

Festive Tipple. No Christmas is complete without a bottle of something special to sip. The wine merchant Berry Bros created The King's Ginger liqueur in 1903 specially for King Edward VII, to stimulate and revivify His Majesty. With its delectable taste derived from macerated ginger root and lemon peel, the tipple remains a winter favourite.
The Daily Telegraph, 26 November 2011

A liqueur fit for a King- It's  not new indeed it's been knocking around since 1903 when it was created by Berry Bros & Rudd for King Edward VII to warm him up on wintry drives but we think it’s time to shout about King's Ginger Liqueur, which has just had a spruce up for the 21st century. This splendidly pokey liqueur is packed with spicy dried and raw root ginger flavours and a robust 41% abv hit, which make it a great addition to long drinks such as Mojito and Mules, and in warming nips like Rusty Nail/Whisky Mac style drinks Oh and you can also tip it over ice cream, pair it with chocolate and sip it neat Classy, versatile and authentic we think it deserves to be the next St Germain.
Imbibe - 11 Nov 09 With a history as colourful as the gun powder plot, The King's Ginger was created in 1903 for King Edward VII to warm the cockles of his heart while enjoying outdoor sporting pursuits. A rich, golden liqueur with a spicy, ginger profile, the King's Ginger tastes delicious in ginger-infused cocktails and long drinks.
Nottingham Post, 20 October 2012 Rich and zesty,The King's Ginger was originally created for King Edward VII by Berry Bros. Rich and warming , try using it in The King's Winter Cup.
Jamie Magazine- November 2012 Rich and golden, this starts with the pleasant warming spice of ginger while lemon oil adds a delightfully crisp, zesty finish.
Waitrose Weekend, 10th August 2017. 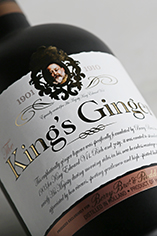 King Edward VII literally lived life in the fast lane. He would endlessly drive his horseless carriage (a Daimler), whatever the weather. So much so, that in 1903 the Royal Physician became concerned about the monarch’s health. So, he called on Berry Bros. and Rudd for a solution, a high strength liqueur that would warm and revivify His Majesty. Crafted from fresh ginger, (for centuries celebrated for its medicinal properties) and enlivened by the judicious addition of citrus oil, The King’s Ginger was born. Rich, golden and delightfully crisp in flavour, it helped King Edward stay colourful and ready for whatever came next.

While wonderfully uplifting and enjoyable on its own, The King’s Ginger comes to life in social situations (just as King Edward did). It is the perfect foundation for any occasion, including these delicious cocktails: King’s and Tonic, The King’s Fizz, The King’s Mulled Cider, The King’s Summer Cup.