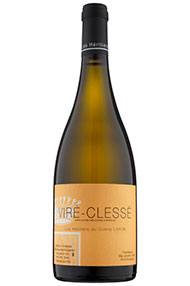 Dominique feels that he has tamed the hedonistic exuberance of this appellation, dividing his vineyard into distinct parcels and harvesting each when it reaches ripeness. The result is a wine with perfect weight and a seductive texture. Drink 2019-2023.
Adam Bruntlett, Burgundy Buyer

In September 1999 the Lafon family bought a domaine at Milly-Lamartine, renaming it Les Héritiers du Comte Lafon. In May 2003 a further six hectares in the villages of Uchizy and Chardonnay were added, followed by Viré-Clessé in 2009 and Prissé, PouillyFuissé and St Véran in 2014. The whole operation, based at Milly, is now looked after by Caroline Gon under the supervision of Dominique Lafon and totals 26 hectares. The vineyards are now biodynamic, and the wines are vinified partly in stainless steel, partly in large wooden foudres and partly in demimuids, depending on the cuvée. It hailed a little in St Véran. Harvest began on 15th September, finishing with the Mâcon-Bussières on 1st October, allowing Dominique and his cellar master, Caroline Gon, to pick each of their parcels at the perfect level of ripeness. Caroline explained that the acidity levels of the 2016s are not dissimilar to those of 2015, but that the lower alcohol means the wines feel fresher and more energetic.

The Wine Advocate - The 2016 Vir-Cless wafts from the glass with notes of musky peach and dried white flowers, framed by sublet reduction. On the palate, it's medium to full-bodied, tense and racy, with good depth at the core and an attractive sense of completeness. It will need some time in the cellar to unwind after bottling, but it's an elegant, vibrant interpretation of the appellation that ranks as one of Lafon's best cuves this year.
William Kelley - 31/08/2018

The city of Mâcon represents the capital of the Mâconnais district in the region of Burgundy, to which it lends its name. There are various appellations under the name Mâcon: the generic Mâcon AC, Mâcon Supérieur and the Mâcon-Villages, in ascending order of how much land each appellation entails.

The standard Mâcon AC controls around 53 hectares of vineyard, 70 percent of which is used to produce just white wine, primarily from the Chardonnay grape. Mâcon used to be recognised for its red wines, but in the last century Mâconnais whites have come to the forefront far more. This generic appellation represents a specific style of wine made across the Mâconnais district, rather than an appellation which would cover a select area or terroir.

The ‘Supérieur’ in Mâcon Supérieur refers not to an increase in quality but rather to the boost in alcohol content, a term which can be applied to either red or white wines.

Mâcon-Villages is a specific appellation which refers to white wines produced in certain areas of the Mâconnais region, and usually denotes an improvement in quality over the straightforward Mâcon AC wines.

Many of the small communes under the Mâcon classification opt to add their name to that of the appellation on their wines; notable examples include La Roche Vineuse, Uchizy and Lugny.

Wines from Mâcon tend to be uncomplicated affairs, simple but enjoyable, and the whites in particular are notable for their dry, light bodies and the presence of floral and nutty facets.