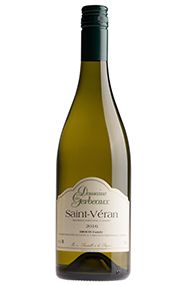 This is an elegant, mineral St Véran, which gives little indication of the long, dry summer that characterised the 2018 vintage. It was raised in stainless steel, rather than oak, and bottled early (in March 2019) to emphasise its vibrant acidity and fresh, white-fruit aromas. It will gain texture and complexity in bottle, but is tough to resist now as an apéritif, or perhaps paired with a Caesar salad. Drink now to 2022.
Will Heslop, Burgundy Buying Assistant (spring 2019) 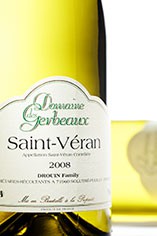 The wine Domaine des Gerbeaux is owned and run by wife/husband team of Beatrice (who heralds from nearby Chaintre) and Jean-Michel Drouin, who since 1979 has developed the domaine originated by his grandfather in 1896. They have now been joined by their son Xavier.

Jean-Michel produces some of the best and most distinctive wines in the Mâconnais region. In typically Burgundian style, he has small parcels of vines (over 40) spread around in Mâcon, St. Véran and Pouilly-Fuissé.

The wines are fermented in stainless steel tanks, enamel vats (to maxmise the contact with the lees) or wooden barrels depending on their nature. The wines are superb and Jean-Michel is in the envious position of knowing that every bottle is sold before it is bottled. In particular, his Pouilly-Fuissé Vieilles Vignes is outstanding, with richness, finesse and perfect integration between fruit and oak. The St Véran wine comes from the village of Davayé, from a vineyard immediately adjacent to Pouilly Fuissé. Berry Bros & Rudd take the entire crop of this cuvee every year.

Saint-Véran is the southernmost appellation of the Mâconnais region of Burgundy, and consists of two areas, divided by the lands of Pouilly-Fuissé, that produce a dry white wine. Named after the town of Saint-Vérand which is included inside its jurisdiction, an administrative error in 1971, the year of the formation of the AOC, meant that Saint-Véran lost the‘d’ at the end of its name.

Saint-Véran produces both white and red wines, but due to its unique position as the most southern appellation of Burgundy, it technically overlaps into the northern boundary of Beaujolais, meaning that some of its communes produce reds to be sold as Beaujolais Cru, but whites to be sold as Burgundian, due to the inferred superiority over the more generic Beaujolais Blanc AOC.

Saint-Véran whites are generally well-regarded amongst the wine community, indeed their qualities were realised prior to its official classification as an appellation in 1971 by many aficionados.

They are all made from Chardonnay variety in the customary Burgundy fashion, but are known to be slightly more full-bodied than other varieties of white Burgundy. Notable changes occur during aging: Saint-Véran whites go from a floral and fruity youth to a nuttier and honeyed maturity. As with many wines from the Mâconnais region they also often display notes of minerality, something which is greatly desired.