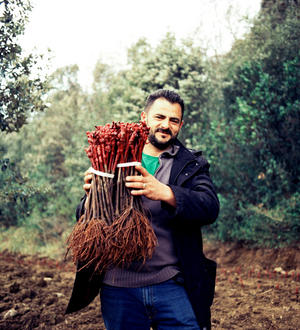 Caiarossa, situated in the heart of the Val di Cecina, on the Tuscan coast. The winery was founded  in 1998 and it was eventually acquired in 2004 by Eric Albada Jelgersma, a Dutch entrepreneur  with a great passion for wine and also the owner of Château Giscours and Château du Tertre - two Grand Crus classé in Margaux, Bordeaux.

From the beginning of 1998, an effort was made to discover the potential of this terrain through careful geological analysis. The results revealed an extremely varied soil. This diversity led to  the definition of 12  vineyard lots, depending on the soil type, which were then planted with the most suitable grape varieties.

There are currently two Caiarossa wines, both IGT Tuscan reds, with the first year being 2002. The top wine is Caiarossa (a cuvée of the best grapes of the year), the second wine is Pergolaia, and is predominantely Sangiovese, in keeping with the region's winemaking tradition.

The wines are allowed to age in a mixture of barriques, tonneaux and large oak casks. Only a small percentage (35%) of new oak is used for Caiarossa,  whilst Pergolaia ages in two years old barriques. The idea is not to hide the personality of the wine behind wood, but rather, to let it express its natural characteristics and flavours.