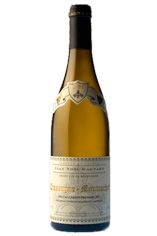 There is immediate power on the nose here and it is broad-shouldered but less evidently aromatic in its youth than the other cuvées. There is however a spectacular weight on the palate and a huge density of fruit that just needs time to show. One to put at the back of the cellar for longer-term enjoyment.
Jasper Morris MW, Burgundy Director

Caroline l’Estimé (née Gagnard) has been ploughing her vineyards since 2000 to avoid the use of herbicides and switched to full organic farming from 2010 with certification beginning from 2011. Noted soil scientist Claude Bourguigon is consulting. The 2010s were picked quickly (not many grapes alas) between 21st and 24th September, with any rot resulting from the famous storm having dried out or turned noble.

Perhaps surprisingly, given that the name ‘Montrachet’ is so synonymous with white wine, much of the soil in Chassagne is more suited to Pinot Noir than Chardonnay. Indeed it was only really in the second half of the 20th century that white wines began to dominate here. The reds have a firm tannic style that needs time to soften, with the best examples coming from the Premiers Crus Morgeot, Boudriotte and Clos-St Jean. At their best they combine the weight of the Côte de Nuits with the suppleness of the Côte de Beaune.